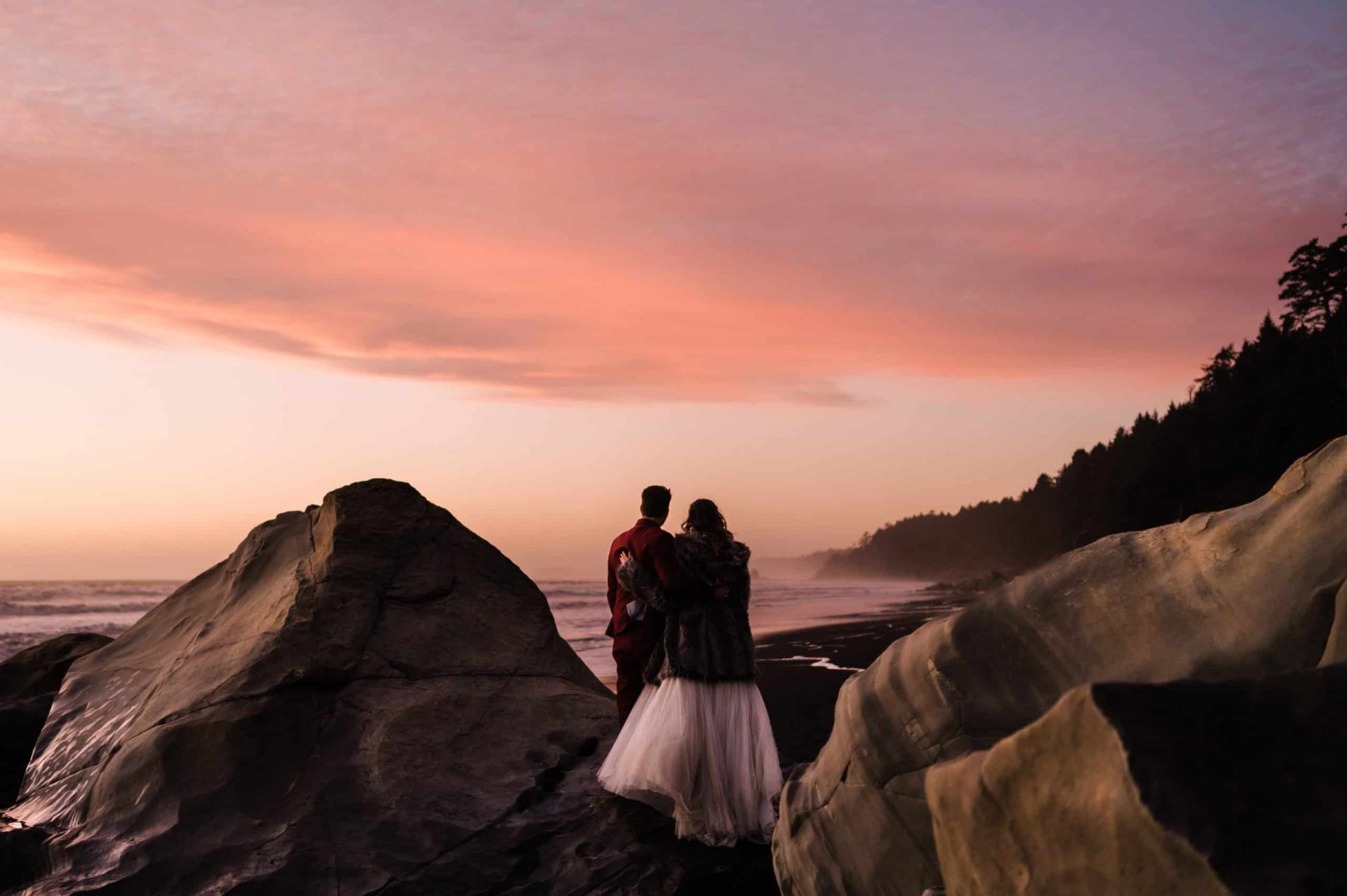 Looking back on this elopement day at Kalaloch Beach, trying to find the words to describe it, I keep coming back to this: Taylor and Mike are best friends. The way they walked and talked and laughed together all day, and supported each other through a forest that was set on ruining her dress and a beach that was set on ruining his shoes (it all ended up okay, don’t worry). It was beautiful and simple and perfect. Just two people exploring some gorgeous places and committing to loving each other forever — what could possibly be better?

Taylor and Mike met at Okeechobee Music Festival when their social circles randomly collided. A few months later, they ran into each other at a local show and realized that they lived in the same city. Taylor slid into Mike’s DMs that night!

Two very social people who love traveling, Taylor and Mike have the ability to make friends with anyone and everyone. When hopping around the country chasing down shows by their favorite musicians, they bring a big crew along, or make friends with everyone they meet there.

However, when it came to their elopement, they knew right away that they wanted an experience that would be special and memorable for the two of them, rather than exclusively for their big group of loved ones. Mike chose the Hoh Rainforest as their magical elopement location, and Kalaloch Beach became the spot where they exchanged their vows and kicked off a new adventure together.

There is so much to love about Kalaloch Beach, whether for a beachy elopement or otherwise. This area is a protected coastal habitat, which means it’s home to an entire host of unique wildlife and marine life that find refuge here. Kalaloch Lodge and more than 200 camping sites give people the opportunity to have a truly immersive experience on the coast of Washington.

For Taylor and Mike, Kalaloch Beach and the western Washington area holds even more sentimental value!

Their first true trip together as a couple was to Seattle, where they went to a festival at the Gorge Amphitheater. They also tacked on a wolf encounter excursion and whale watching, two experiences that are hard to find anywhere else. After this trip, Taylor and Mike knew that they hadn’t explored everything the PNW had to offer, and eloping here would give them the opportunity to see and do more, and to revisit a place that holds special memories and meaning.

Outfits for a Kalaloch Beach Elopement

I have to say, both Taylor and Mike looked absolutely incredible for their elopement. For a magical vibe, the forest and beach already provide, but these two brought it up a notch!

Mike went for a burgundy suit that popped wonderfully against all the green of their surroundings. His shoes, from Taft, were fly as hell.

Taylor went for an off-white, champagne-esque gown that glittered and sparkled with every movement. She’s not normally a sparkle-and-shine kind of girl but if there’s ever a time to go all out, your elopement is certainly it! She looked like a forest princess, complete with the hair and makeup to match.

Taylor and Mike were ready to roll with the punches on their elopement day. I think that makes for an important element in adventure elopements! When the Hoh Rainforest wasn’t quite as private as they were envisioning, we decided to hold off on their vows until we made it to Kalaloch Beach. I scouted the area the week before and found the perfect secluded place for their ceremony, and I was so glad they trusted me to lead them around! The privacy of the spot and the golden hour sun shining on them was impeccable.

And watching the looks on their faces as they took in the Hoh Rainforest was the best feeling for me. We lucked out with the best possible September weather — bright, blue skies and warm sunshine. There’s nothing quite like the rainforest on a sunny day. The light filters through the moss and creates an air of magic that feels too fairytale-like to be real.

It is a unique privilege to be invited into something as intimate and special as your elopement day. Every couple I photograph has a beautiful story and intentionality for their ceremony, just like Taylor and Mike on Kalaloch Beach. Documenting the beginnings of these new chapters is the best thing I could ever do. And I can’t wait to do it for you, too! Reach out to me here for elopement photography in Oregon and Washington.