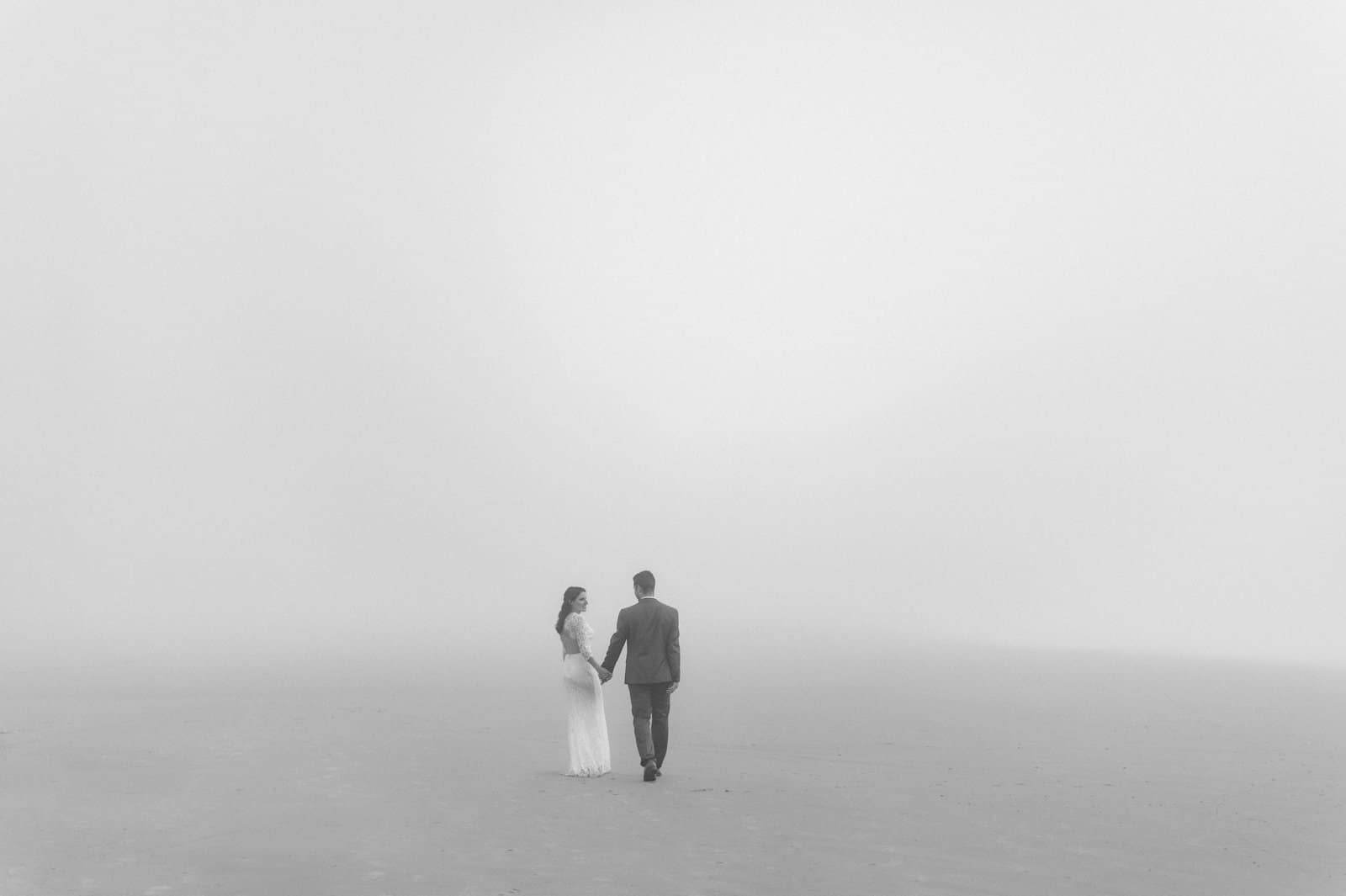 Maggie and Dan’s first visit ever to Cannon Beach was for their elopement! After seeing and hearing so much about the area, they thought it was the perfect place to get married. And even though the fog was so thick that a lot of the views were obscured, I couldn’t have imagined a better Oregon Coast elopement experience for this sweet couple.

Maggie and Dan met in 2015 through a mutual friend, and the Hinge app! They had their first date at a bar in a cute Chicago neighborhood where they would eventually move in together. Dan proposed on the beach in Michigan while visiting Maggie’s family. They celebrated their engagement at their favorite winery, complete with dancing.

These two love outdoor adventures — camping, boating, hiking, you name it. Their favorite thing to do is explore new places, and they’ve started a scratch map with the goal of visiting all 50 states.

They have one adorable cat, Felix, and love trying new recipes together when they aren’t out adventuring.

The fog on Maggie and Dan’s elopement day was so thick that Haystack Rock was invisible — you know, the view they’d traveled halfway across the country for! It made the day moody and a little eerie, but Maggie and Dan took it all in stride. They were so exuberant and both shone so much, we were able to laugh at the uncooperative weather (classic PNW!).

Plus, with everything so obscured, all the focus was on Maggie and Dan and the love they share — the whole reason we were there in the first place!

Maggie and Dan also chose to elope completely privately. While of course their family and friends are so loved and important to them, they told me that the best version of their day included just the two of them, and I couldn’t have imagined a better way for them to get married.

Maggie and Dan like colors that are more earthy and natural, as well as Scandinavian-inspired palettes. A little warm, a little moody. With this in mind, Dan opted for a blue suit, with brown accents through his belt and shoes. Maggie went for white, with a neutral floral bouquet.

Maggie and Dan put a lot of care into their details despite the day being more minimal, which I think was an amazing addition to the day! With shorter elopements especially, taking the time to pick out these little extras to go into your day really helps make it feel special. Maggie’s jewelry and perfume, their vow books, Dan’s whiskey, the special mugs they ordered… All this helps elevate the experience and supports the idea that your elopement is so much more than just a photoshoot!

Hands down, their ceremony was the most memorable part of the day for me as Maggie and Dan’s Oregon Coast elopement photographer. They laughed through the whole thing, clearly giving off so much effervescent joy to be there, joining themselves together officially! We gave a loud cheer and Dan picked Maggie up, we laughed at the weather and pulled up our map apps to confirm that we were, in fact, right in front of the rock that we couldn’t see, which normally towers over the beach impressively.

We squinted to see if we could make out any hint that there was anything there, a slight shadow, but there was nothing! Just the thick fog and two people in love.

Hair and Makeup: The Union Knot

Maggie and Dan’s Oregon Coast elopement is a great reminder that nothing is ever guaranteed for your elopement — not the weather or the views, not roads being open or traffic being light. We can plan all we like, and I know the PNW well enough to help you make decisions that offer the greatest chance at success, but sometimes, life just happens! It’s up to you to make the most of it, and remember why you’re there in the first place. For elopement photography anywhere in the Pacific Northwest, reach out to me here. 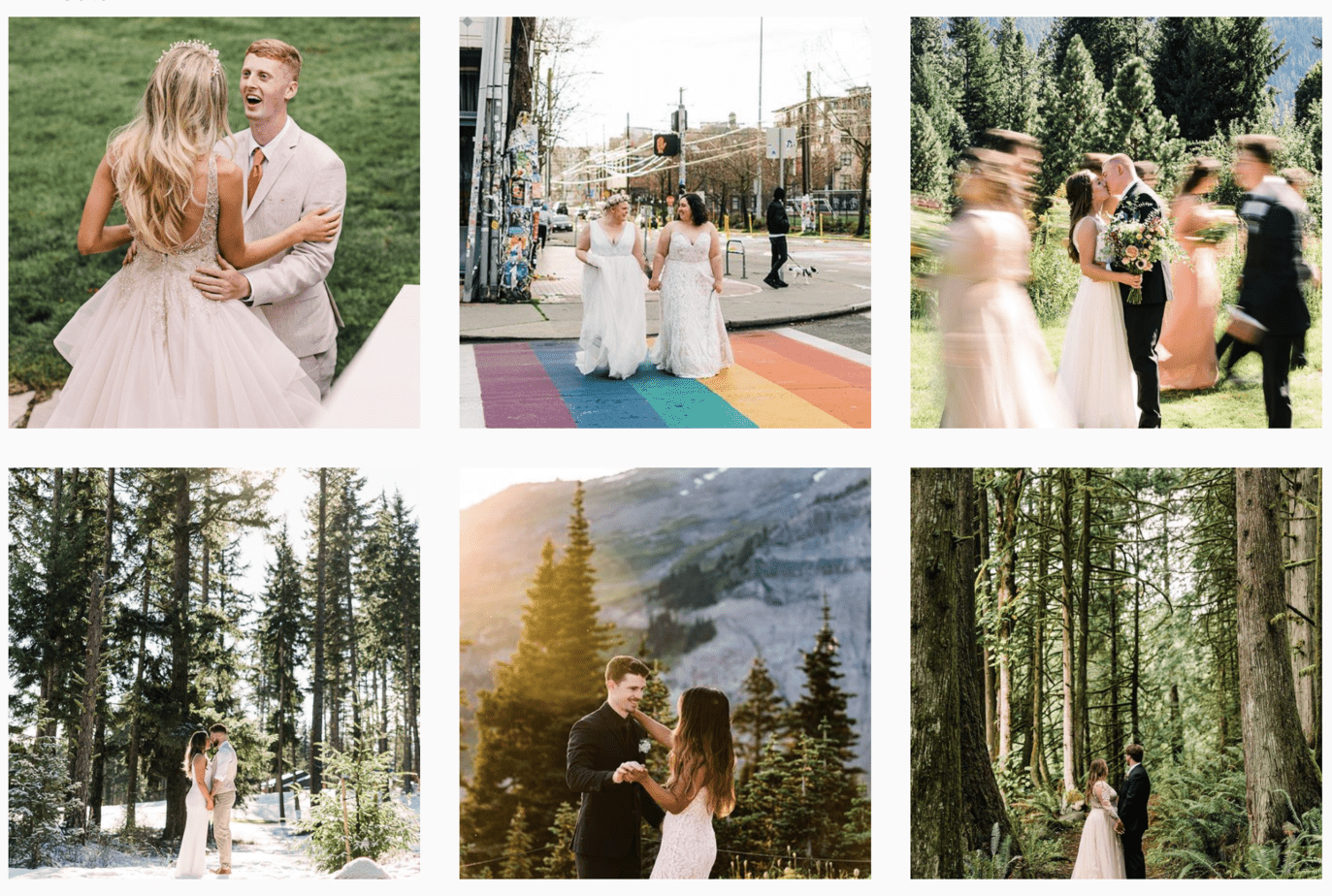